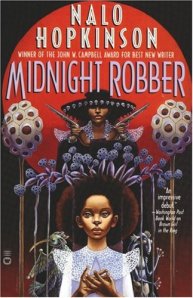 My Summer of Reading began with Sabriel, an amazing work that I will review at a later point. Instead, here, I want to focus on Midnight Robber, a work by Nalo Hopkinson, a Jamaican-Canadian science-fiction author who masterfully weaves many different themes of diasporic literature with culturally relevant and creative science-fiction. The character of the Midnight Robber is a popular and important one in the Caribbean Carnival tradition, and Hopkinson’s treatment of the mythology is well handled here.

Midnight Robber begins by establishing a dual-narrator scheme that works beautifully: One narrator regales the reader with the larger than life ‘Nansi tales of Tan-Tan, who turns out to be out protagonist, as revealed by the second narrator. A key element of Hopkinson’s writing that may delight some readers and alienate others: The narrators (and Hopkinson’s prose) tell the story of Tan-Tan in patois, or “Creole and Carribean Vernacular”. Many times, the use of vernacular language in prose provides difficulty for readers, even readers of color. However, while initially jarring, the language used eventually begins to flow and settle until the reader can’t imagine the story being told any other way.

The story of Tan-Tan is set on Toussaint, a colony of diasporic peoples whose existence is undercut by the presence of nanomites that relay every possible bit of information through the “Grande Nanotech Sentient Interface”, or, as most of the people in Toussaint call it: Granny ‘Nansi’s Web. The nanomites, and they technological advances that the afford the people of Toussaint, are central to the first half of Hopkinson’s story. They remain important throughout the book. Hopkinson does a splendid job of marrying technology with the seemingly roughshod life of the people of Toussaint. For example, all of the technology exists to a point where houses built by hand and of what we would consider normal efforts are obsolete to the point that characters think people who labor manually touched in the head. It is an interesting dichotomy, and one that I appreciate as a reader who usually sees cultures such as these relegated to daub-and-wattle huts.

“My seraphic dam was a very queen of Egypt; mine pater its monarchical magnate, and I, a son of the sun, a coddled cocotte in my child’s robes of ermine and cloth-of-gold. Who would curdle my kingly boy’s joy, who mash me down and steal me away like jacks from a ball?”

And so it went: the classic tale, much embroidered over the centuries, mirrored the autobiography of Olaudah Equiano, an African noble’s son stolen into slavery on seventeenth-century Earth. The Robber Kings’ stream-of-consciousness speeches always told of escaping the horrors of slavery and making their way into brigandry as a way of surviving in the new and terrible white devils’ land in which they’d found themselves.”

Hopkinson creates many characters and gives them an interesting, but well used, plot to play in. We follow Tan-Tan, the protagonist, through her pampered childhood as the daughter of the Mayor of Toussaint. She is the type of child we love to read about: precocious, intelligent beyond her years, adventurous, and filled with childhood wonder. Her parents are similarly well-rounded: Her father, Antonio, is a less than effective mayor who womanizes and cheats someone every time he blinks, but loves his daughter unconditionally. Her mother, Ione, is the closest thing available to a waif. Ione is spoiled, self0centered, and an ineffectual mother, but she loves her husband. Minor characters are handled equally well: Tan-Tan’s Nurse, the house hologram, Eshu, the Palanquin runners, and Ben, resident Toussaint programmer. Tan-Tan’s life is easy until his father discovers that all is not well in his marriage. The story unfolds beautifully, albeit rather slowly, through a series of events that lead to Antonio escaping imprisonment through a device given to him by one of the Palanquin runners.

Tan-Tan and Antonio are transported to New Half-Way Tree, a prison colony in a parallel world. They end up in Junjuh Town, one of the many settlements populated by Toussaint criminals. Here, amidst first-contact tension and utopian/dystopian tropes, they must start their life anew. They meet a new cast: Chichibud, this work’s alien sensei; Aislin, the doctor of Junjuh town; Janisette, Antonio’s new wife; and Melonhead, who plays a very important part in Tan-Tan’s life. Here, in New Half-Way tree, Hopkinson presents us with a colorful and fantastic world that serves as the backdrop to Tan-Tan’s tumultuous journey into womanhood.

Midnight Robber is a wonderful work. It is vibrant, full of color and amazing imagery. Although the pacing lags at times, the fantastic elements are done well. Tan-Tan is a complex protagonist,and throughout the book it is easy to forget that she is a child all the way through. Many of the minor characters are well written, but they only make the tiniest of appearances and then forgotten about. I would have liked to see more of many of the interesting people that Hopkinson introduces us to: Quamina, Aislin’s developmentally challenged daughter; Maka, the Palanquin runner who could perhaps have changed the world (No, really! The Palanquin runners have discovered something that could potentially change the scope of the Toussaint people’s existence, but absolutely nothing is done with it.) Tropes of African and African-American literature abound in Midnight Robber: Life is impossibly hard, but lived heartily, infidelity and lust abound, men and women’s lives revolve around themselves and their fleeting passion, finding their way in the world. These are themes seen in many classic African American works, repeated almost endlessly (see: J. California Cooper, Pearl Cleage, Morrison, many contemporary African American literary works). What makes Hopkinson’s take fresh is the use of new and well-integrated technological advance, the fantastic element inherent in every paragraph, and the nod back to Caribbean and ultimately African themes.

I read (and loved) Brown Girl in The Ring, Hopkinson’s debut novel. I love Midnight Robber as well. It is an exquisitely presented tale of love, loss, and coming of age, told from a point of view rarely acknowledged in SF/F: A black woman’s. Despite minor flaws (and a few plot holes), Midnight Robber is a work that definitely belongs on any Sci-Fi or Fantasy Fan’s bookshelf.

Have you read Midnight Robber? If so, what did you think? Did you enjoy it? Hate it?