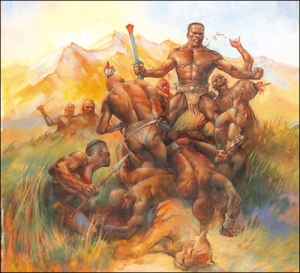 It’s time ladies and gents. Who’s the baddest MF in the Fantasy world this month?

Some of you may be able to tell this month’s Baddest MF by the very conspicuous art (^up there). If not, let me hip you to something wonderful.

In that post, I said: “Imaro is a force.” That description wasn’t very far off. Imaro is the baddest ass in Charles Saunders’ fictional world of Nyumbani. He is born, and the world is immediately different.

He starts out with a badass-ly awesome name, given to him by his mother. Imaro is the “son of no father”. His father *might* have been a Cloud Strider, a race of Mortal Gods (gods-who-are-not-gods) who seek to bring enlightenment and rainbows to Nyumbani. This essentially means that Imaro has badassery running though his veins.

Imaro’s existence is characterized by him not fitting in with his people, or with any of the other groups he comes into contact with. When he does find a group that accepts him, terrible things are usually not far behind.

Even so, Imaro is a change agent that inexorably impacts the world around him, leaving steaming piles of awesome in his wake. When he’s a child, he kills a leopard. Yep. A whole leopard. On the heels of that feat, he escapes from members of a rival tribe (called the Turkhana, characterized by their wrist knives) out for blood by cutting through his ropes and eventually kills the leader of the bandits, who just happens to be a magic man.

A few years later, he takes on an immortal being called a Mashataan, who is possessed of really wicked mystical powers. Imaro smashes his head with a rock.

What follows is a stream of adventures so surreal, so astonishing, and a story so well told that it’s hard to not imagine, as a teenager, reading this book and imagining myself leading an army and subduing supernaturally animated idols.

Imaro is special to me, and I’m sure to a lot of other writers because of what he represents: A departure from the blue-eyed, European fantasy norm. He allows people of color, and especially people of African descent to let loose their imaginations and enjoy the ride.

Not to mention that Imaro could make flesh-colored mud pies out of quite a few denizens of the fantasy world.

3 thoughts on “Baddest MF on the (Fantasy) World – November”